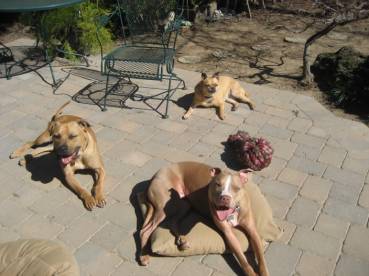 Dogs that have been properly introduced can learn to relax around each other.
Natural Greetings in Canines Nature intended dogs to meet and greet in ways radically different than the typical forced, human-inspired introductions. In a natural setting, dogs would never immediately run up and invade each other's space. If two dogs happen to notice each other from a distance, they will usually show the side of their body and the side of their face to the other dog. They might even do this by turning to sniff at a bush or something on the ground in order to appear less threatening to the other dog. Unfortunately, owners often miss or misread these cues and instead we yank them along, forcing them to confront the other dog.

In dog language, head-on greetings with hard stares equal “challenge”; since dogs generally look to avoid conflict, they do not normally stare at each other. They tend to approach in an arc rather than making a bee-line straight towards one another. This communicates that no confrontation is intended and inspires a more comfortable greeting.

How We Set Dogs Up to Fail
Many dogs have forgotten or never learned at all how to properly greet other members of their own species. Dogs are mostly on leashes, behind fences, rushed into greetings by their well-meaning people, and kept from situations that would have otherwise helped them learn canine greeting etiquette.

Leash reactivity is one of the biggest dog behavioral issues caused by us humans. Tight leashes can create frustration when your dog sees other dogs on the street. This can cause body language in your dog that may look offensive to other dogs. (See Dog Aggression vs. Leash Reactivity). Other behavior often facilitated by humans – pulling, hard stares, and running up to other dogs head-on – can turn greetings sour.

Dogs aren’t all that different from people – they have personal space just like we do – and may become offended when a stranger invades that space. Think of it this way: if I were to wave to you from a distance, that would be a nice gesture. If I were to rush up to you and wave my hand right in your face, that would be rude, intrusive, and somewhat threatening. Dogs are constantly placed into situations in which they are forced to endure invasion of their space and are set up to fail at greetings. The sad thing is that the dogs get blamed for snappy behavior or are said to be “aggressive” in these situations. But it’s a normal reaction for a dog to get cranky about another dog running up, acting rude, and rushing a greeting (especially so when the dog is on its own territory).

Some Considerations First, Please!
Before you set up a new-dog introduction, take into account your own dog’s general attitude towards other dogs. If your dog has a solid history of playing well with properly matched playmates, then you have a better chance at success. Pairings of the opposite sex tend to be most successful. Some dogs are uncomfortable with or reactive to new dogs and need very slow introductions. Realize that, like humans, dogs don’t necessarily like every single dog they meet, and some do best as an only dog. If your dog has a history of reacting negatively to the company of other dogs, then it is probably best to just have him as an only dog.

Successful Introductions Lead to Successful Integration!
It is a must to properly introduce your current dog to a new dog, especially if the new dog is meant to become part of your family. Do not just walk a new dog into your home with your current dog waiting inside. Your dog will naturally feel that the newcomer is an intruder, not a new friend. First impressions matter! Properly introduced dogs are more likely to become buddies. The goal is to emulate the natural greetings talked about above.

To properly introduce your dog to a new dog, you’ll need two people, one person per dog, and some high-value treats. These can be pieces of chicken, hot dog or cheese, anything that will get the dog’s attention and that it doesn’t get normally. Start by walking the two dogs on leash in the same direction in neutral territory. If you find that they pull toward each other, stare at each other or are overly excited, then you’re too close too soon. Put some distance between the dogs, and have them just hang out for a bit at that distance before continuing to walk. Use your treats to reward your dog for remaining calm and focusing on you. This gives them something to do while they get used to each other’s presence. Be patient and relax so the dogs can relax too. 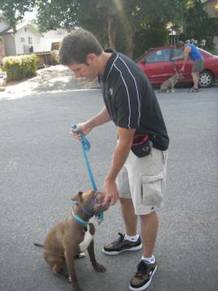 Start the dogs at a comfortable distance first, and use high-value treats to get them to focus on you.
As the dogs begin calming down in each other's presence, begin to move them closer to each other. At some point they should become more relaxed, and you can proceed with your walk. You are emulating the natural greeting: they are not face to face. Instead, they are showing the sides of their bodies to each other while walking.

What you’re looking for is calm, relaxed and confident behavior. Neither dog should be overly aroused, nervous, stiff, or fearful. (If the dogs don’t seem to be able to relax and be friendly, it might be best to contact a trainer to help you move forward.)

If they are relaxed and nicely interested in each other, then go ahead and let them get close enough to sniff. As they sniff, watch carefully. Warning signs include stiffening, low growling, avoidance, or hard stares. If you see these behaviors, calmly move the dogs away from each other. Remember, some dogs don’t like the company of other dogs and they should never be forced into a greeting. Some dogs may need more time or a few more intros to get used to another dog.

If the dogs remain relaxed and pleasantly interested in each other, one or both of them may gesture to     play. Keep the leashes loose and let them interact on leash for a bit to make sure all goes well. As long as both dogs are still relaxed and showing loose, happy body language, you can drop the leashes and let them play while dragging their leashes in an enclosed area.

Watch the play for a while to be sure everyone is minding their manners: no rude behavior or pushy type of mounting behavior allowed initially. Every few minutes, before the dogs reach a state of high arousal or over-excitement, stop the play and get the dogs calm again or walk them. Then let the play resume. End the play on a good note; don’t let them play into crankiness.

With you as their leader to give them guidance and direction, the dogs will get to know each other and build a trusting bond.

The Next Step
After they have successfully played for some time, you can bring both dogs into your house or yard. If the new dog is going to be a member of your family, it’s best to crate the new dog often and not let it just roam around. Be sure to reward your dog often while the new dog is near, so that it realizes good things happen when this newcomer is around. Don’t pay more attention to the new dog than you do to your first dog. Make your dog think it is a great thing to have a new family companion.
​